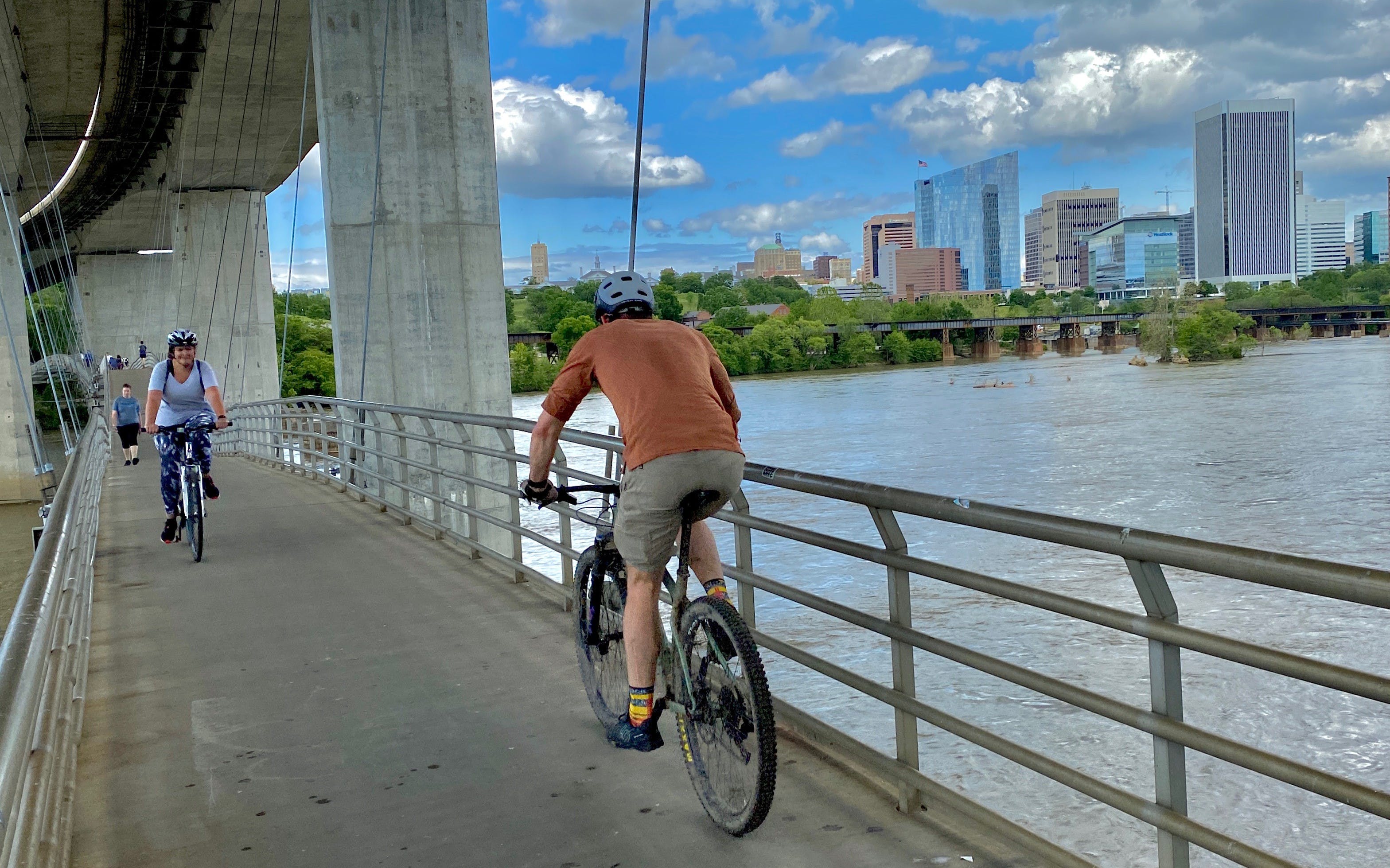 Explore All of Downtown Richmond's Parks

The James River Park System, a unique part of Richmond’s Department of Parks, Recreation and Community Facilities, includes more than 550 acres of shoreline and islands in Virginia's capital and features the centerpiece of our city and liquid lifeline of Richmond: the James River. The James River Park System (JRPS) encompasses a majority of the fall line of the James River in downtown Richmond. Rocks, rapids, meadows and forests make for an abundance of unspoiled natural beauty mixed with a little bit of wilderness to make downtown Richmond an urban jungle ready to explore.

Located along the James River in downtown Richmond, Belle Isle is a great place for people with a love for the outdoors, granting them the opportunity to view wildlife in its natural habitat. From wooded areas to mountain biking trails, interpreted historical sites, a granite wall for rock climbing and wheelchair-accessible fishing at the quarry pond, guests have a variety of options to choose from.

Brown's Island is managed and maintained by Venture Richmond and offers six acres of riverfront with access to the James River, surrounding James River parks, outdoor concerts and more for visitors, residents and employees of Downtown Richmond.

You can also rent Brown's Island for various events, such as marathons, festivals, and more!

Chapel Island was named after an Episcopal chapel that was located there and active prior to the 1741 founding of St. John’s Episcopal Church in Church Hill. For access to Chapel Island, take the footbridge across the canal from Great Shiplock Park. Chapel Island offers different types of fish such as shad, white perch, rockfish, smallmouth bass, herring and several types of catfish. There is also a half-mile of winding, wide and flat single-track for hikers and bikers. Additionally, the central gravel path continues west along the island through the retention basin owned by the DPU to the 14th Street boat take-out.

Ancarrow’s Landing, the easternmost section of the park system, has recently undergone a major renovation, including an expanded and improved parking lot, new lighting and extended and enhanced trails. This park section is a prime spot for the running of the shad every spring. The trail loop is accessible from the east side of Ancarrow’s Landing and offers family-friendly riding for beginning mountain bikers. Ancarrow’s Landing is also the beginning of the Richmond Slave Trail. Seventeen markers along the Slave Trail display somber and illuminating information on the history of slavery in Richmond. The trail goes from the Manchester Docks at Ancarrow’s, across the river into Shockoe Bottom to Lumpkin’s Slave Jail. This self-guided trail covers nearly three miles. 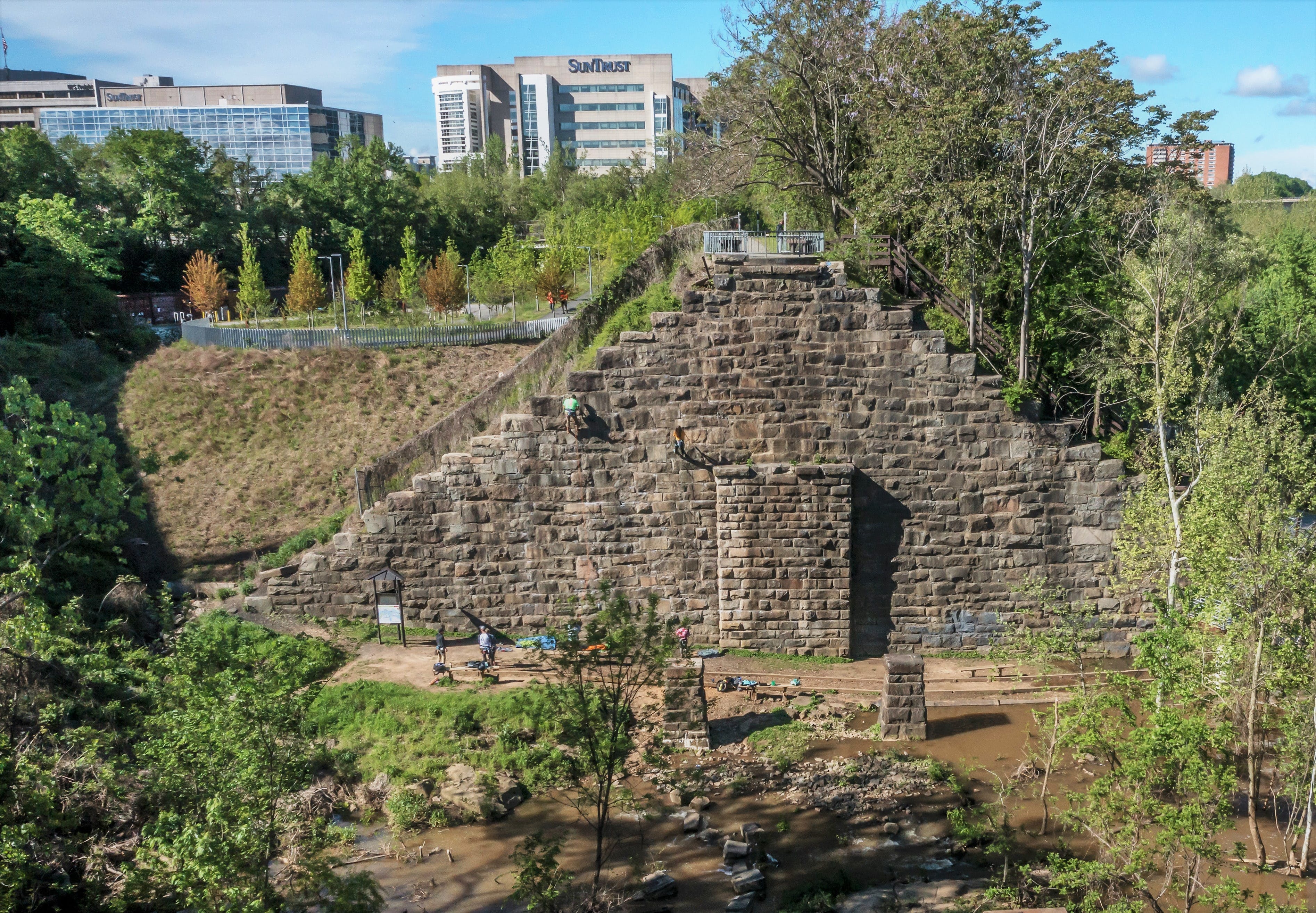 This 1,600-foot-long pedestrian and cycling pathway sits atop a former hydroelectric dam, some 20 feet above the river, connecting the north bank on Brown’s Island to the south bank of Manchester. Completed in 2016, and named for the late City of Richmond senior planner T. Tyler Potterfield, the bridge provides unequaled river vistas. The panoramic views of the downtown skyline paired with sounds that fail to give the impression of the extraordinarily close relationship of the bridge to the roaring river, are an experience we highly recommend. The wheelchair accessible bridge is open to pedestrians and cyclists 24 hours a day. Access is provided from either side of the river: Brown’s Island on the north and from Semmes Ave. on the south side.

Unique views of the James River, the city skyline and historic sites can be seen from atop the Floodwall on the southern side. Completed in 1995 to protect areas of downtown and Manchester from devastating flooding, the southbank section comprises Floodwall Park, a popular spot for hikers, runners, fishermen, bird watchers and kayakers.

This area, under the Manchester Bridge, is a unique outdoor climbing venue under a series of abandoned train trestles that have been equipped with bolts and shutts. Here, climbers can hone their skills of leading, both trad and sport, rappelling and self-rescue. Climbers and non-climbers alike will enjoy a visit to this uncommon section of the James River Park System.

The Pipeline Rapids walkway may be downtown Richmond’s best kept secret. A wonderful place to watch nature and escape the city for even just a few minutes, the Pipeline is also a favorite for those looking for a moderate level of thrill as it brings you face-to-face with the full rage of the river's rapids. From the parking lot at the end of S. 12th Street, you walk to a metal ladder, then descend to the metal catwalk atop the pipeline, which offers up close and personal views of the Pipeline Rapids. Please pay attention to water levels for safety’s sake, and keep an eye on the CSX railway viaduct overhead.

If chilling isn’t what you’re about, North Bank Trail provides an excellent challenge for hikers and mountain bikers. This advanced trail runs uninterrupted from Pumphouse Park to theTredegar Parking lot and offers panoramic views of the river unavailable in other sections of the Park. Technical and fast flowing, this singletrack is rocky and rugged in spots with some steep climbs and fast descents. The trail can be elongated by crossing the Boulevard (Nickel) Bridge and hooking up with the Buttermilk, Forest Hill and Belle Isle Trails creating a mega loop.

Buttermilk trail was aptly named because when milk was still delivered to people’s homes, the milkman would store the buttermilk in a cool well that is still located on the side of the trail. The trail parallels the south side of the river and is a real challenge and considered the most difficult of the different sections of the James River Park System. Buttermilk combines tight, twisty, fast descents and steep climbs with lots of rocks and roots. Several creek crossings and some bridges and rock gardens add character to one of the most beloved trail systems in the Richmond area.

The park opens at sunrise and closes at sunset, unless otherwise noted by official posted park system signage.

Getting to Richmond's riverfront is easy when you take the GRTC public bus system. Just take the route #87 bus across the Lee Bridge from the north side of the river to the stops at 2nd Street and Brown's Island Way near Tredegar or at 2nd and Spring Street. The route #87 bus runs every 60 minutes. On its way back across the river, the bus stops at 2nd and Spring Street and again at 2nd Street closer to the Virginia War Memorial. Make sure to look for the GRTC signs.

Downtown Richmond has tons of outdoor activities to offer. Find out what else to explore in the city!