Placemaking in downtown Richmond reinvents public spaces as the heart of our social interactions thru projects and events like Park(ing) Day, parklet programs and more!

Making a Place in Downtown Richmond

From wayfinding and bike racks to turning parking spaces into gathering places, Venture Richmond is there to help with placemaking in downtown RVA

“Placemaking” is a people-centered approach to the planning, design, creation and management of public spaces. For us, an effective placemaking process results in inviting and well-maintained public spaces that contribute to downtown Richmond’s health, happiness and well-being. We do this in small- and large-scale ways like film screenings in outdoor public spaces, decorative street banners, beautification along the Canal Walk and some of our downtown streets, advocating for accessible transportation and multi-modal options for all and collaborating with community partners on long-term planning for downtown and riverfront public space.

We are constantly working on ideas and projects to improve the quality of life and place in downtown Richmond.

Brown’s Island, located on the James River, has the potential to be the crown jewel of the downtown Richmond riverfront. In 2012, City Council adopted the Richmond Riverfront Plan, which made recommendations to transform Brown's Island into a daily destination for recreation, exploration, socializing and experiencing the beauty of the James River, as well as music and cultural events.

The Brown’s Island Improvement Plan is a more detailed conceptual plan developed by Venture Richmond and 3north to help the City of Richmond implement the Richmond Riverfront Plan recommendations for Brown’s Island.

Brown’s Island should be attractive and comfortable for every Richmond resident and visitor, both during events and as a public park all other days of the year. While the 2016 opening of the T. Tyler Potterfield Memorial Bridge has dramatically increased visitation to the island—approximately 500,000 crossings per year—the rest of the island also needs improved amenities to accommodate this increased demand.

The Brown’s Island Improvement Plan received conceptual approval from the City Planning Commission in December 2019. Venture Richmond is committed to raising private funds to implement the Riverfront Plan recommendations for Brown’s Island, which include river and canal terraces, play spaces for children, more trees and landscaping, more ADA accessibility and other pedestrian improvements, shade, seating and running water/permanent restrooms among other amenities. 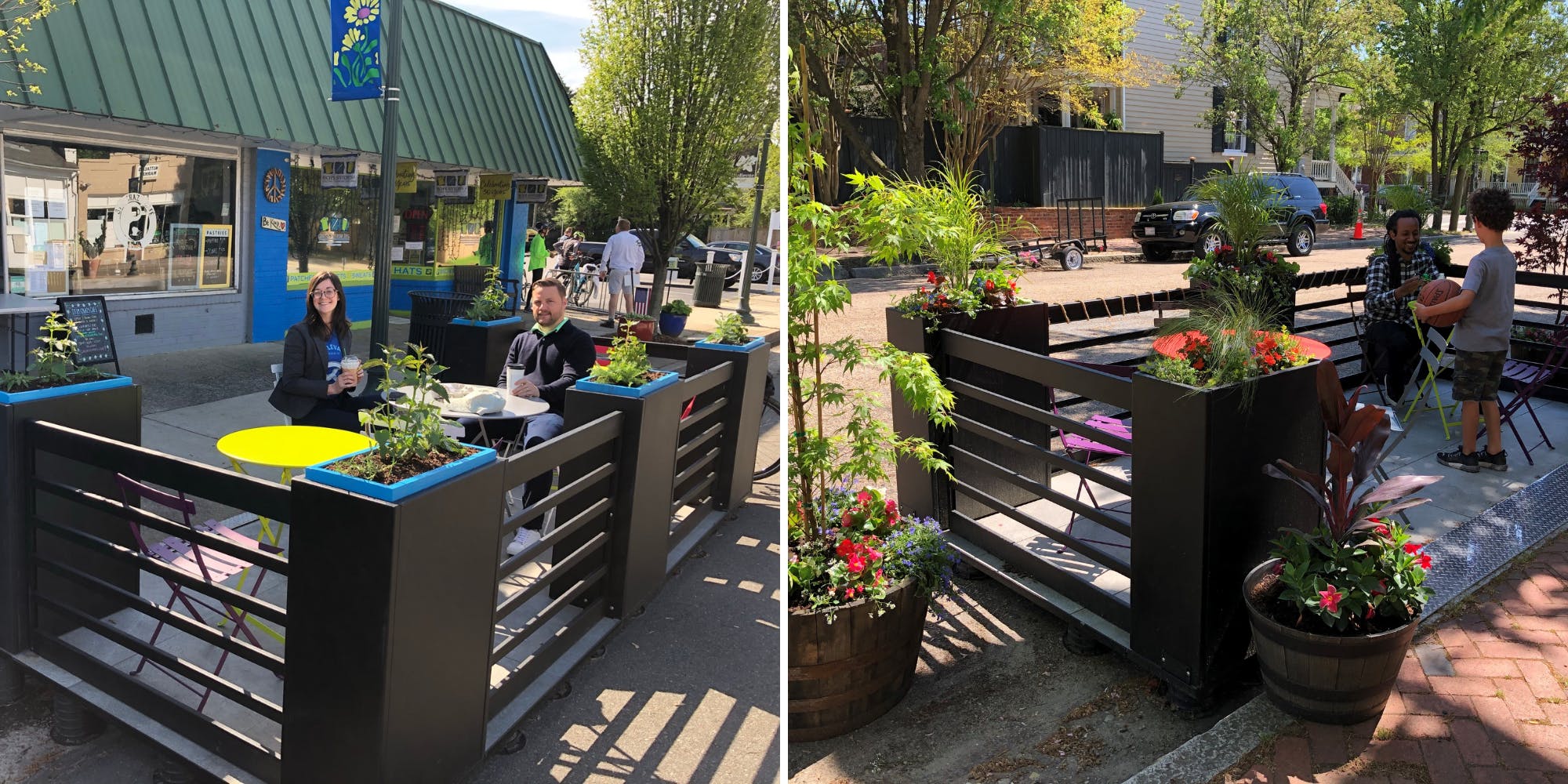 Picnic in a Parklet Program

Starting in the spring of 2021, the City of Richmond began installing prefabricated parklets at different locations across the city. This pilot program gives us an opportunity to try parklets on for size as a way of providing more urban public space and supporting small businesses by offering people a place to enjoy pre-purchased take-out meals (table service is not available in public parklets, but people are allowed to eat their take-out meals in them).

The parklets were purchased by the City using federal CARES Act money and locations were identified through the Picnic in a Parklet program, a partnership between the City of Richmond and Venture Richmond. The locations currently include:

Find more information about Picnic in a Parklet here!

A new parklet, plaza and community-painted mural at a gateway to the Arts District

Designed by local firm Walter Parks Architects, this is the first custom-designed public parklet built in the City of Richmond. Located outside of ART 180, it will provide a safe space for participants in the nonprofit’s youth programming to gather before and after class, and is open to the general public as well. Local artist Chris Visions designed the mural, which references the rich history of Jackson Ward and the neighborhood’s enduring mission to carry on a legacy of Black excellence. The design is based on the Sankofa, an Andikra symbol from Ghana meaning “to go back and retrieve/get,” and the colors echo the red, black and green of the Pan-African flag. ART 180 youth painted the mural as part of the culmination of their Community Program earlier this fall.

The plaza is a result of reclaiming unused public space in front of Gallery 5 and restoring the historic bricks that existed beneath the asphalt. Artist Chris Visions created an artistic extension of the intersection mural into the plaza space and Venture Richmond provided bike racks for people visiting Gallery 5, ART 180, and neighboring businesses and residents. The Broad Street Task Force, a group of proponents of Richmond’s Downtown convened by the mayor, shared that residents want more vibrant spaces to gather in the area. This, alongside an Asphalt Art Initiative placemaking grant from Bloomberg Philanthropies and the advocacy of community partners, acted as a catalyst for this new public space placemaking project at the intersection of Brook and Marshall.

Started in San Francisco in 2005, Park(ing) Day is a global event that occurs annually on the third Friday of September, aimed at reclaiming on-street parking spaces by temporarily transforming them into exciting and imaginative park spaces, or “parklets.”

In 2019, we sponsored a Park(ing) Day design/build competition that featured over 20 pop-up parklets designed and built by creatives, architects, local businesses, and community members. The contest entries were judged and awarded by a panel of notable Richmonders, with the winner receiving funding assistance for a more permanent installation. You can read more about the 2019 event here.

Since Park(ing) Day 2019, five parklets have been installed throughout Richmond as a result of our Picnic in a Parklet program and you can visit them today.

If you would like to participate in Park(ing) Day next September by building a temporary pop-up parklet for the day, please reach out to Yessenia Revilla at the City of Richmond for guidance: Yessenia.Revilla@richmondgov.com. 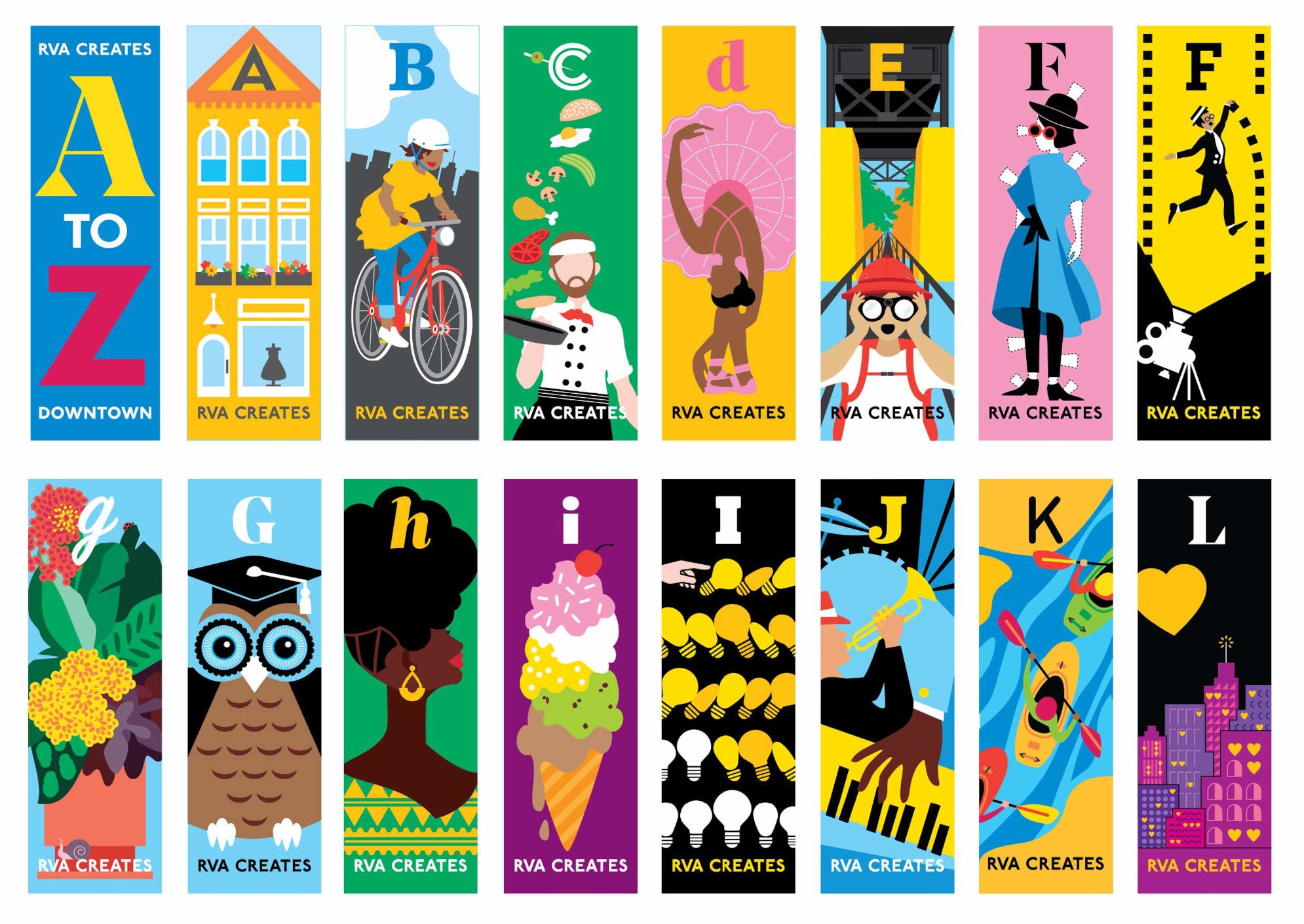 Street pole banners may not seem like a big deal, but they are a big part of our job at Venture Richmond. Downtown Richmond's street banners are used as a creative way to add branding, color and excitement to downtown.

We are responsible for managing the banner program, nearly 200 banner poles, on behalf of the City of Richmond.

Our current banner campaign: RVA Creates A to Z, is a celebration of our vibrant community that was inspired by the incredible range of creativity that exists downtown.

If you would like to request a bike rack for your block, or have questions about existing racks, please contact Max Hepp-Buchanan.