Located along the James River in downtown Richmond, Belle Isle is a great place for people with a love for the outdoors, granting them the opportunity to view wildlife in its natural habitat. From wooded areas to mountain biking trails, interpreted historical sites, a granite wall for rock climbing, and wheelchair-accessible fishing at the quarry pond, guests have a variety of options to choose from.

From Belle Isle, visitors can see historic sites like Hollywood Cemetery, Tredegar Iron Works, and the downtown Richmond city skyline. Belle Isle has many bike trails around the island and has a small cliff used for rock-climbing instruction.

Large, flat rocks surrounding the island make for good sunbathing, but the water is rough around the rapids and not suitable for swimming. Children should be supervised.

Belle Isle also features a bicycle skills area, perfect for honing the mountain bike techniques needed to tackle the more than 22 miles of trails around the city.

Belle Isle is an island in the middle of the James River in downtown Richmond. William Byrd I acquired the island in 1676, and it remained in the Byrd family for a century.

Belle Isle has been the site of a number of industrial operations beginning with a nail factory in 1814 and a mill in the same decade. Belle Isle Manufacturing Company built the Richmond area’s first chartered rolling and puddling mills on the island in the 1840’s producing nails, bar iron, boilerplate, and other works of iron. This company became the Old Dominion Iron & Nail Works, which by 1860 was one of the premier nail manufacturers in the country and still occupied the island as late as 1910. The remains of an historic iron foundry are still visible.

During the Civil War, the island was home to the Confederacy’s largest military prison, which housed captured Union prisoners in tents surrounded by a stockade. At its maximum capacity in 1863, the prison held 10,000 Union soldiers, with tents for only 3,000. With no barracks for the prisoners, exposure to the elements was a large factor in what would prove to be a staggering death toll on the island.

The island’s granite offered ready material for the operation of stone crushing plants. A former quarry is still accessible on the north side of the island, not far from the James River’s Hollywood Rapids. The shell of an early 20th century hydroelectric plant stands on the south side of the island, visible from the footbridge to the south bank of James River Park. Operated by the Virginia Railway and Power company, in 1905 it was used to generate electric power for Richmond’s streetcar system, the first of its kind in the nation. 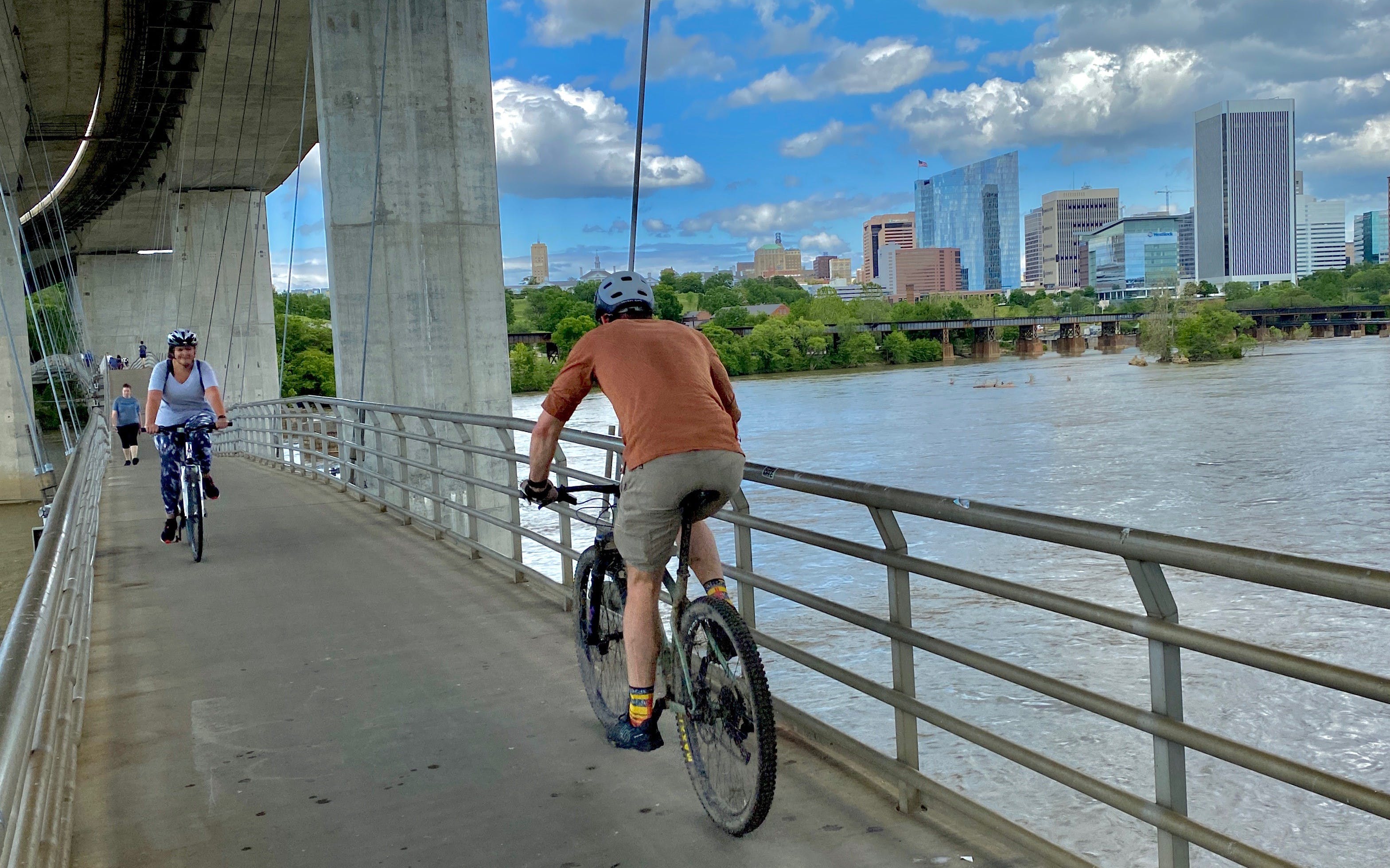 From downtown Richmond’s north bank, along Tredegar Street, the main access point is the Belle Isle Pedestrian Bridge that runs under the Lee Bridge. This footbridge offers both pedestrian and bicycle accessibility from Tredegar Street. Alternate access is by wooden bridge near 22nd Street or by rock-hopping from the south shore.

There is a seasonal public water fountain located by the Wedge Building on the southeastern side of Belle Isle. The island is open at sunrise and closes at sunset. 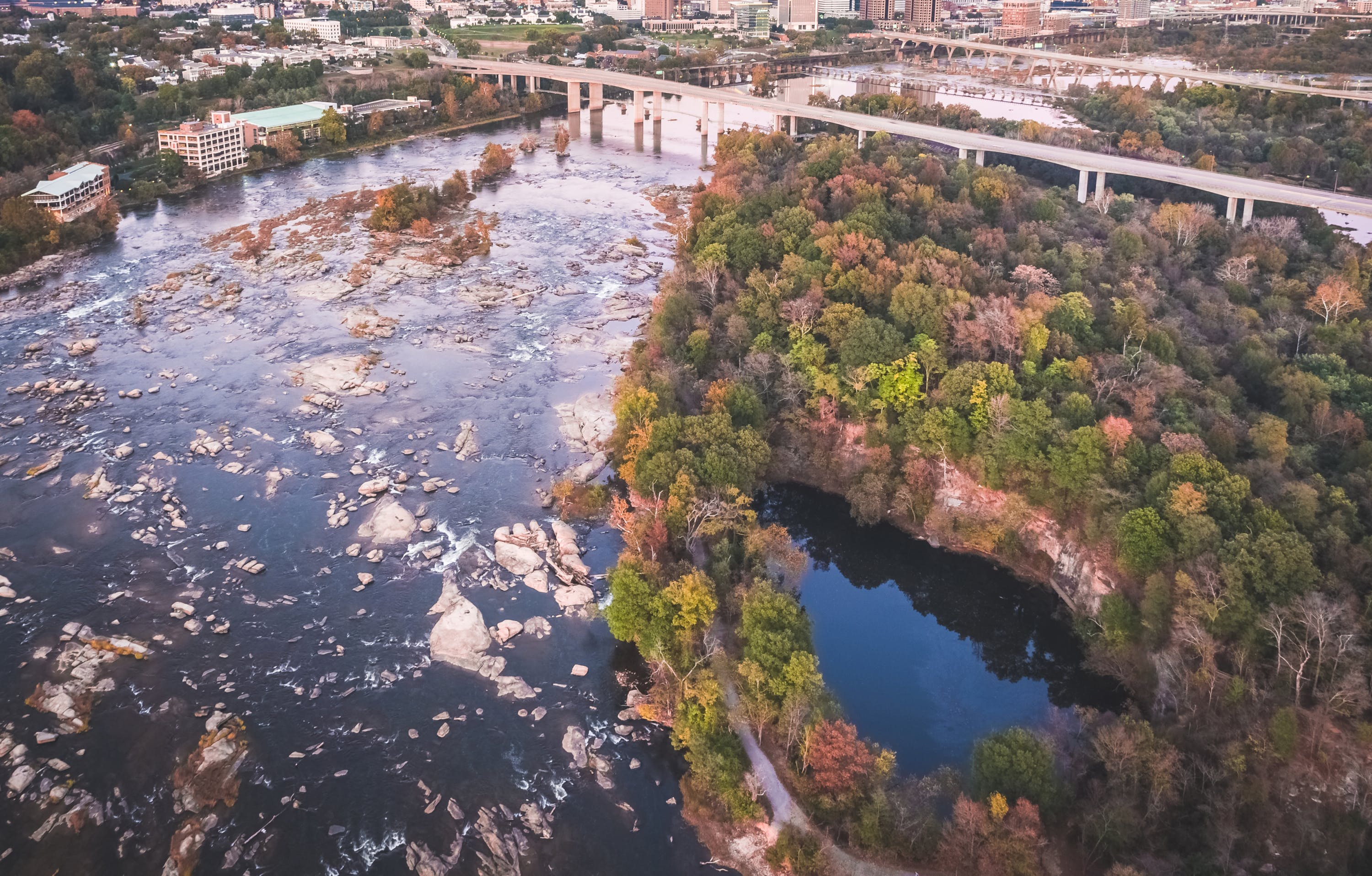