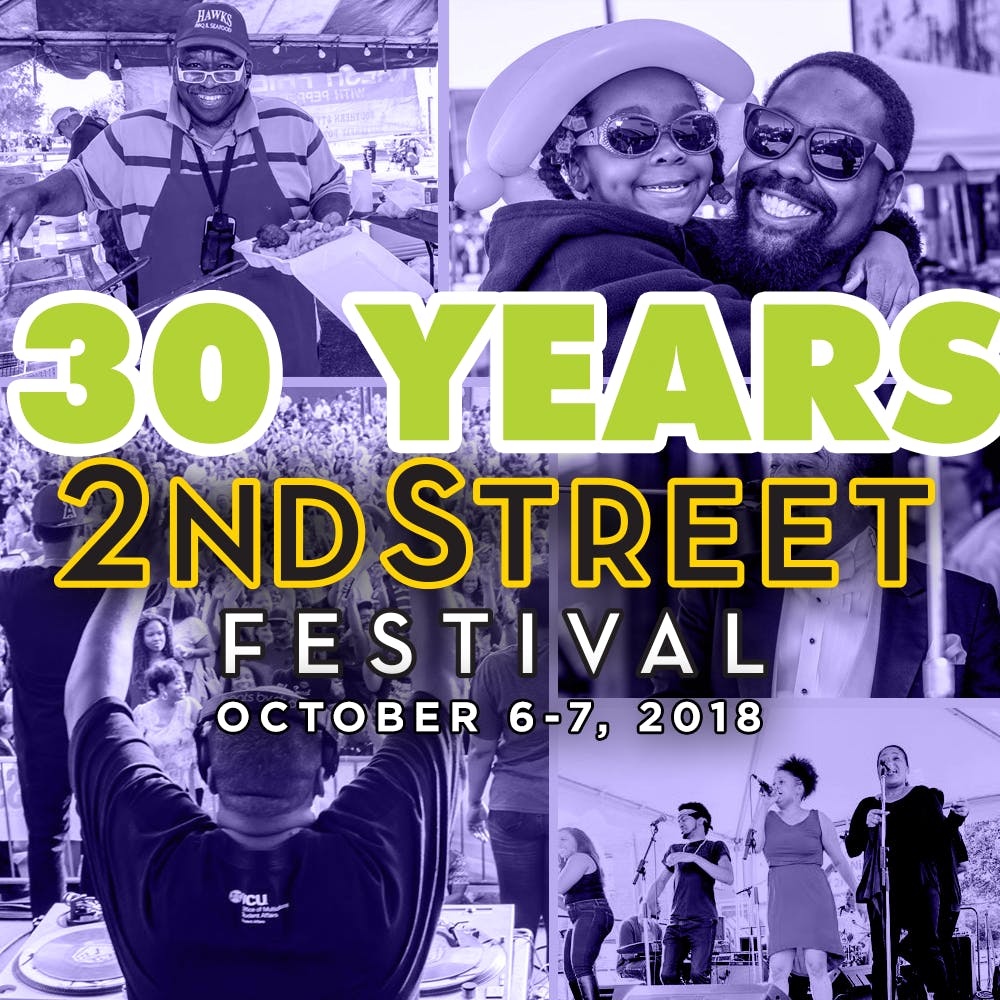 The 2nd Street Festival, presented by Altria and Dominion Energy, returns for its 30th Anniversary on Saturday-Sunday, October 6-7 to celebrate the rich culture of the historic Jackson Ward neighborhood. This FREE event is produced by Venture Richmond Events, LLC.

As always, the 2nd Street Festival takes place the first full weekend in October. Over the years, it has grown to be one of the Mid-Atlantic's largest street festivals. Nearly 40,000 people visit historic Jackson Ward to reminisce about the days when 2nd Street was the heart and soul of Richmond's African American community, and was known as “the Harlem of the South.” 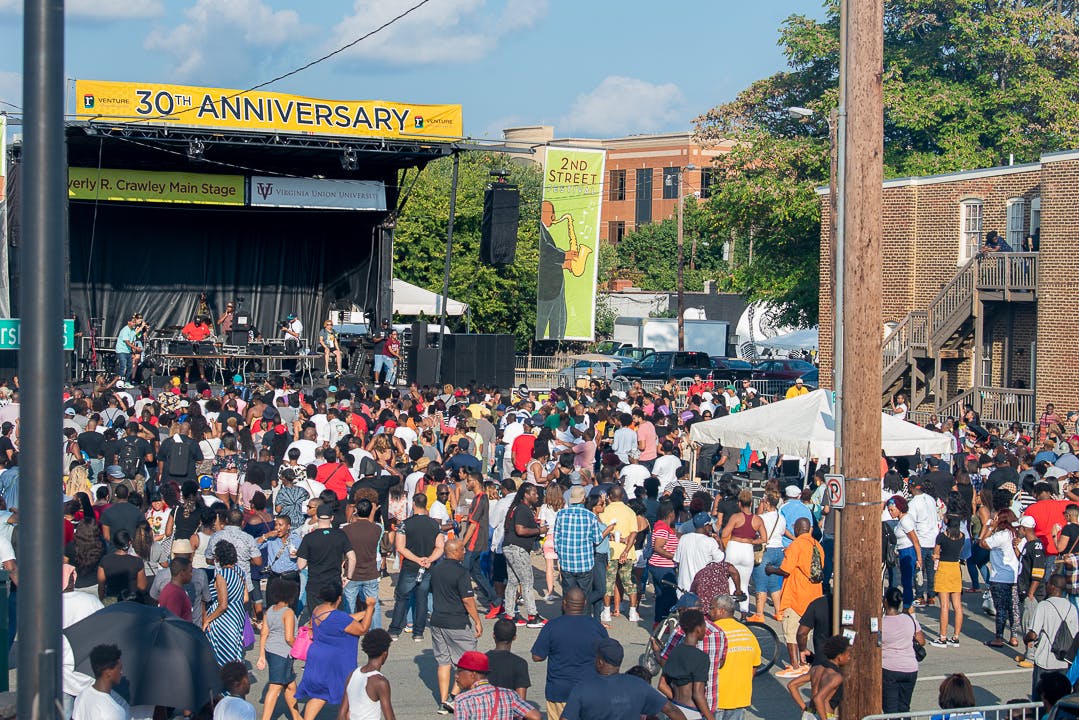 This year the festival features co-headliners Stokley, former lead singer of Mint Condition, and The Art of Noise, and spotlights the extraordinary talents of Richmond’s keyboardist Debo Dabney. Mighty Joshua, Curv Appeal, Comedian Antoine Scott, Rodney The Soul Singer, Guitarist Zack Artis and many other performers will be showcased over the two-day event.

As always, the 2nd Street Festival takes place the first full weekend in October. Over the years, it has grown to be one of the Mid-Atlantic's largest street festivals. Nearly 40,000 people visit historic Jackson Ward to reminisce about the days when 2nd Street was the heart and soul of Richmond's African American community and the neighborhood was known as “the Harlem of the South.” The festival features four stages of musical entertainment, along with food vendors, a marketplace, a Kidz Zone programmed by the Children’s Museum of Richmond, balloon twisting by Balloons By Extreme and Artists Row featuring David Marion with Liberated Flow, creator of this year’s festival poster. This is his fourth poster for the festival. Additional artists include: Kelvin Henderson, Fruit of the Spirit; Abdul Badi, The Art of Abdul Badi; and Reshada Pullen, Jireh.

In the mid-1980s Stokley became a founding member of Mint Condition, and after several years of gigs, the band crossed paths with that of lauded multiplatinum producers and his Minneapolis hometown heroes Jimmy Jam & Terry Lewis. Fresh off the success of Janet Jackson’s Rhythm Nation, Jam & Lewis recruited Mint Condition to their label’s roster and released their debut, Meant to Be Mint, in 1991. The group soon found success in their Billboard Top hit classics “Breakin’ My Heart (Pretty Brown Eyes),” “U Send Me Swingin’,” “Forever in Your Eyes” and “What Kind of Man Would I Be,” to name a few.

Stokley charts a new course with his debut solo album, Introducing Stokley, featuring guest appearances by the likes of GRAMMY-winning jazz pianist Robert Glasper and Estelle. Introducing Stokley offers listeners a fresh perspective of a dynamic voice that has resonated with core fans around the world for over two decades. Some of his hit songs as a solo performer include “Level,” “Organic” and “Not My Daddy,” with Kelly Price.

Sunday’s Headliner, The Art of Noise

The Art of Noise draws music lovers of all ages, races and genders who have a true appreciation for the art that is music. The pictures are painted as each DJ, artisans in the skill of hip hop, feed and vibe off each other’s groove and rock the crowd. The Heavy Hitter DJ Lonnie B and DJ Marc transform the noise of the streets into nostalgia. The experience is like colorful impulses stimulated by the record scratching, the base booming and the vibration of the treble.

Mad Skillz and Kelli Lemon help the audience come together as bodies move like fluid and voices sing in unison. Their performances produce “a magnetic energy flowing throughout the room when they play that one song and the crowd erupts as people start to remember exactly what they were doing when that song came out.”

Herbert A. Dabney, III, affectionately known as “Debo”, is one of the area’s most dynamic and animated pianists. For 30 years Debo has performed at the 2nd Street Festival. His repertoire ranges from Jazz, Gospel, R&B, Swing, Blues and Children’s Classics. A native of Manakin, VA, he’s a graduate of Maggie Walker High School and continued his education at Norfolk State University with a major in music. He has opened for national artists such as B.B. King and organist Jimmy Smith, toured with Average White Band and performed on Soul Train. Debo currently serves as Music Coordinator for Sixth Baptist Church in Richmond. He’s the musical director and keyboardist of “The Happy Band” and performs in Richmond Jazz Society ensembles, “Glennroy Bailey & Company” and “Make Music with Me Band,” as well as a variety of Jazz and R&B groups. He credits his love of the piano to Art Tatum, Ramsey Lewis and Les McCann.

New this year, Venture Richmond Events will provide FREE guided walking tours led by Gary Flowers who has a four-generation family connection to Historic Jackson Ward. "Educating the public to the place Historic Jackson Ward holds in commerce, education, and dismantling racial segregation in the United States of America is critically important to me,” Mr. Flowers said. These 60-minute tours will leave at 1:00 p.m. and at 4:00 p.m. on Saturday and at 4:00 p.m. on Sunday. Tour groups meet on the sidewalk at the Maggie Walker NHS at 2nd & E. Leigh Street.

Also new this year, and in addition to walking tours, Mr. Flowers will also conduct a “Renaissance Roll Call.” This will allow attendees to be drawn to a special recognition of the many religious, benevolent, fraternal, and sororal institutions which were organized in the 1800s and early 1900s to uplift Richmond's Black community during the Jim Crow era in Jackson Ward. A "Renaissance Roll Call" will be conducted for current members – as well as people whose families were members – of organizations such as, but not limited to: The Independent Order of St. Luke, Independent Order of the True Reformers, Historic churches in Jackson Ward, The Richmond Planet, The Astoria Beneficial Club, The Theban Beneficial Club, Masonic Lodges, The Order of the Eastern Star, Divine 9 historically Black fraternities and sororities, among many others. Participants are asked to wear uniforms, insignia, medallions and paraphernalia representing the respective organizations.

The Community Cubes project, sponsored by Art on Wheels, will showcase how our everyday living is an individual as well as a shared experience. Their belief is that art is a tool to help transform and build happy and heathy communities. A cube bench is created from castings of everyday objects that people carry with them. During the 2nd Street Festival, clay slabs will be available and festival attendees will be asked to press something they are carrying into the clay to make an impression. The clay will be used as a mold to cast into a cube bench for sitting. This will be installed at the bus stop located near 2nd and Broad Streets.

Returning for his fourth year, the featured artist for 2018 is Richmond based artist David Marion. Marion was born in South Carolina in 1982 and at an early age he found his artistic gift and developed a passion for creating. As a graduate of Hampton University, with a Bachelor’s degree in Architecture, he always found time to continue following his passion and practicing his craft. Using oil as his medium of choice he has specialized in figurative art and portraiture for nearly a decade. He has exhibited in galleries and museums in New York, Chicago, South Carolina, and Virginia, and is on his way to becoming a nationally-recognized artist.