Downtown Richmond’s riverfront is rich with art and exhibits that allow visitors and residents to experience the James River and the Canal Walk’s treasured history and beauty.

Explore Richmond's history with a self-guided, walking tour of Richmond's art and statues on the Riverfront.

Some of the most dramatic events in Richmond’s history occurred during three days in April 1865 when the city fell to the Union Army after four years of civil war. As the Union Army marched down Broad Street, the Confederate Army evacuated while enslaved Richmonders gained their freedom. These events are memorialized on a bridge overlooking the James River. Quotes, images and views of the remains of Civil War-era bridges bring back the extraordinary events of the war’s end. A series of markers are incorporated into the James River overlook on the northwest corner of Brown’s Island. The exhibit can be reached from Tredegar Street near South 5th Street.

“The Mill,” a sculpture by Richmond artist Brad Robinson, is located near the entrance to the T. Tyler Potterfield Memorial bridge toward the south side of Brown’s Island. Unveiled in 2012, it is intended to reflect the shimmering waters of the James River. It stands 16 feet tall and is made of brushed aluminum with bronze edging. The sculpture has a crescent-shaped bench around it, which creates a nice viewing spot.

The Headman Statue on Brown’s Island depicts a 19th century boatman — also known as a headman — and commemorates the early contributions of African Americans to commerce in Richmond. Boatmen were essential to Richmond’s canal system, which provided faster transport of raw materials and finished goods around the falls of the James River. The statue is 14 feet high with a 23-foot “sweep,” or oar, and it was designed and created by Paul DiPasquale. The bronze version of the statue was unveiled in November 1993.

On May 24, 1607, Capt. Christopher Newport and a party of explorers who had landed at Jamestown just days earlier arrived at the site of modern-day Richmond and planted a cross in honor of King James I of England. In the decades following Newport’s visit, steady inroads by Europeans into Native American territories led to numerous hostilities and several wars. In 1646, a treaty gave much of eastern Virginia to the English. By the early 18th century, the land along the falls was part of a large plantation owned by William Byrd, the region’s most prominent trader in furs, tobacco, rum and slaves. In 1705, the plantation passed to William Byrd II, who, when pressed by the Colonial assembly to set up a town at the site of his trading post, laid out 34 squares of four lots each, thus founding Richmond. In recognition of the significance of the area’s early history, the Association for the Preservation of Virginia Antiquities erected a cross in 1907. Today, this cross is located on the Canal Walk at 261 S. 12th Street.

In 1854, the Tidewater Connection Locks linked the canal basin to the James River tidewater below Richmond. The system contained five granite locks, each measuring 15 by 100 feet. This resulted in a flight of water stairs that lowered boats a total of 69 feet within a distance of three and a half blocks. A sixth lock, the Great Ship Lock, was located 1.5 miles east near Pear Street. Traffic on the canal peaked in the late 1850s following completion of the Tidewater Connection Locks. However, the canal suffered heavily with the expansion of railroads. In 1880, the canal was sold to the predecessor of the Chesapeake and Ohio Railway System (now CSX) and the towpath was largely converted to rail beds. The Tidewater Connection Locks are located in the canal at the end of S. 12th Street. A large-scale locks model exhibit is located on the Canal Walk just east of the locks.

George Washington promoted the concept of a great central waterway long before he became the nation’s first president. A surveyor of western lands as a young man and later a landowner of vast tracts beyond the Allegheny Mountains, Washington had close knowledge of the western territories, which he feared France and Spain would control if trade routes to eastern markets were not established. In the early 19th century, other far-sighted Virginians took over Washington’s leadership role. The final elements of his plan were completed in the 1820s, when the Kanawha Turnpike joined the headwaters of the James River to the Kanawha River. In 1835, the James River and Kanawha Co. was formed, and within 15 years, a canal system stretched 197 miles to Buchanan.

An exhibit illustrating George Washington’s vision and the construction of canals along the James River stands at the Turning Basin Plaza between Virginia and 14th Streets. A set of elegant bronze reliefs recognizes Washington’s early vision of the country’s westward expansion and the importance of uniting the new territories with the eastern states. Integrated with seating, the reliefs provide a bronze and granite surround for a bronze replica of a period surveyor’s transit mounted on granite in the center of the exhibit. This exhibit is located at 139 Virginia Street, next to the Turning Basin and Riverfront Canal Cruises.

Richmond’s riverfront is steeped in African-American history. African-Americans worked on the river and canals, in the iron works and tobacco warehouses. Among the most famous enslaved persons in Richmond’s history is Henry “Box” Brown, who worked in a tobacco warehouse at Cary and 14th Streets when his family was sold to a North Carolina plantation. Overcome with grief, Brown contacted an agent of the Underground Railroad, who helped him mail himself to freedom. A metal reproduction of the box in which Brown escaped can be viewed on the Canal Walk near S. 15th and Dock Streets.

Installed in May 2010 as a set of free-standing steel sculptures, they depict flowers unfurling. Located at the start of the Virginia Capital Trail near Dock and S. 18th Streets, the three 9½- to 11-foot-tall pieces by artist David Boyajian are called "The Bud and Seed Group." The artwork evokes themes of nature, industry and rebirth, the artist said. "I think it's the element of nature and the industrial quality of the area. It's sort of the dichotomy of the two -- the coming together. They're budding forms." - Richmond Times-Dispatch 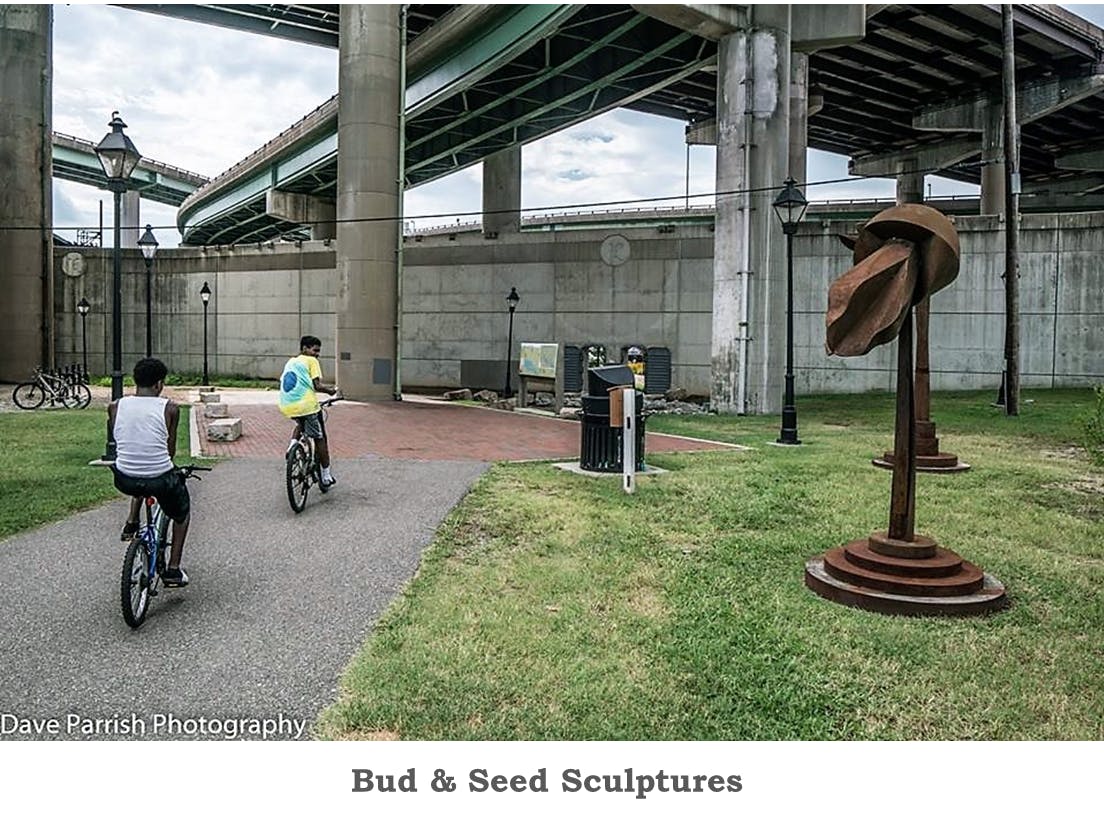 Installed in October 2016, the eight 17-foot steel rings located near the south entrance of the T. Tyler Potterfield Memorial Bridge allows for great public outdoor interaction. “It’s a gentle nod to the biking community, and the [Americans with Disabilities Act] connection,” artist Joshua Wiener says. “My dad is in a wheelchair now. My brother has a disease where he will be soon. And we grew up going into nature. The accessibility that this bridge provides is like a wheel into nature. And [the rings] make their own path: It rolls up the hill, it rolls down. It creates this whole other trail.” The steel rings evoke the feeling that the bridge connects the Manchester neighborhood to downtown Richmond. “Manchester is heavily industrial.” The City of Richmond hired Wiener for the riverfront art installation, titled “The Path Untraveled.” - Richmond Magazine

If you’re looking for a place to park near Richmond’s riverfront or need to find the best way to get into the city, look no further than our Parking and Transportation in Downtown Richmond guide! 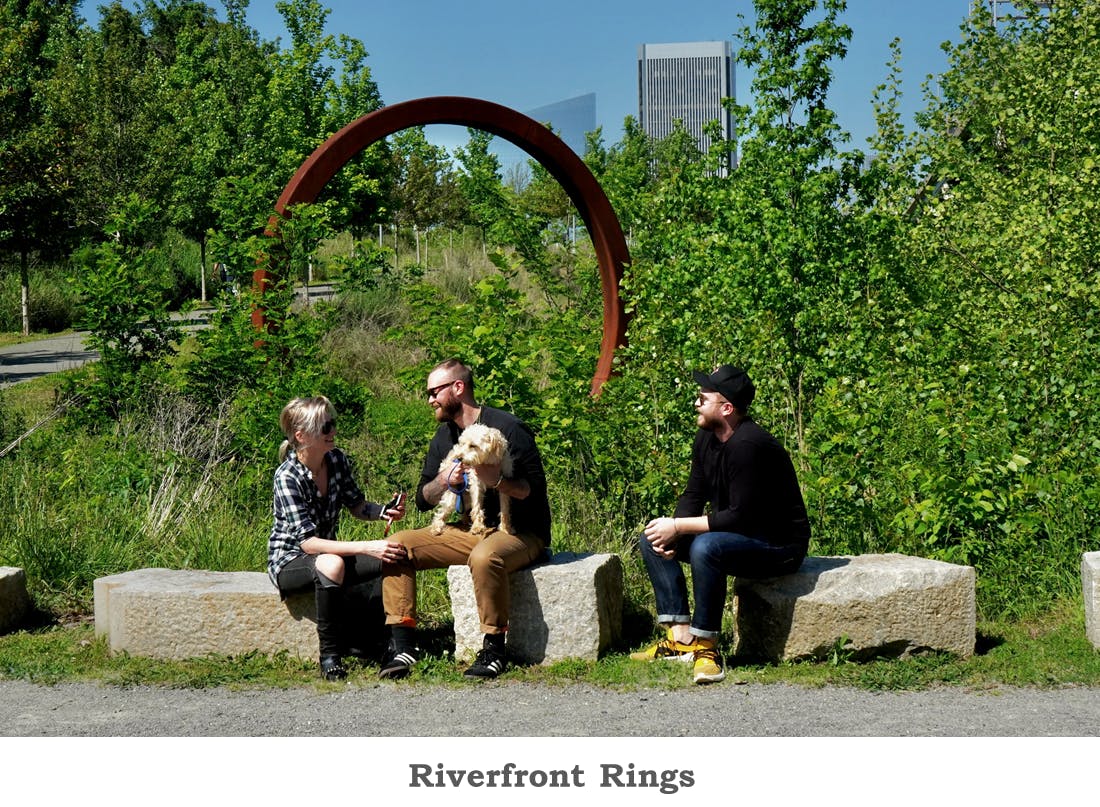 Getting to Richmond's riverfront is easy when you take the GRTC public bus system. Just take the route #87 bus across the Lee Bridge from the north side of the river to the stops at 2nd Street and Brown's Island Way near Tredegar or at 2nd and Spring Street. The route #87 bus runs every 60 minutes. On its way back across the river, the bus stops at 2nd and Spring Street and again at 2nd Street closer to the Virginia War Memorial. Make sure to look for the GRTC signs.

There are plenty of things to do on Richmond's Riverfront! Check out the Canal Walk and our Riverfront Canal Cruise boat tours.