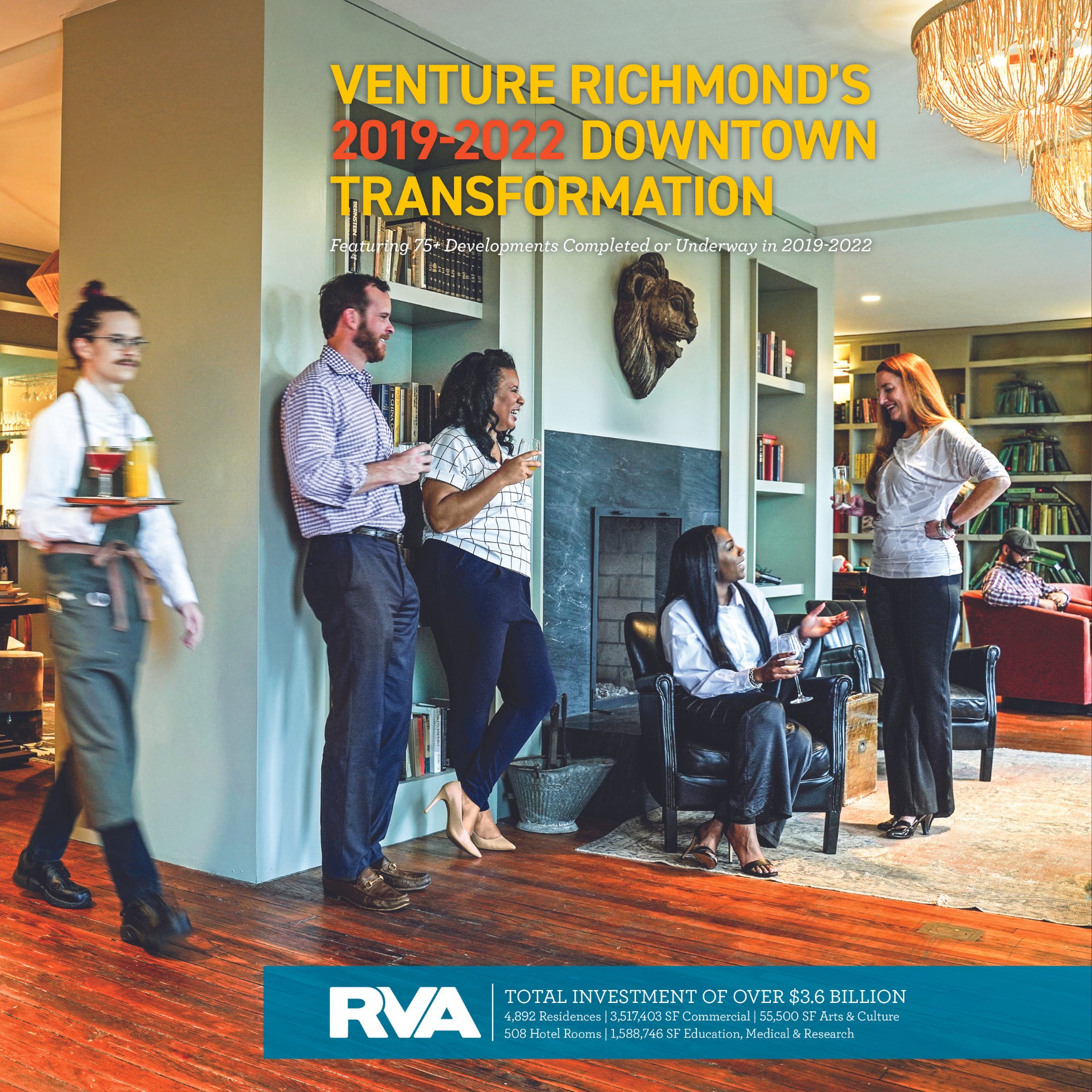 $3.6 Billion+ of Investment in Downtown Richmond

Virginia’s capital city is booming. From 2019-2022 more than 75 development projects totaling upwards of $3.6 billion have been completed or are underway in the Downtown master plan area of the City. Venture Richmond has tracked the developments and recently published a 32-page magazine documenting the growth and investment.

“As the capital of the Commonwealth and the anchor of the Central Virginia region, the City of Richmond and its downtown core is a thriving hub of employment, residence, retail and tourism,” said Richmond Mayor Levar M. Stoney. “We will continue to leverage this concentration of assets to grow opportunity and drive a high quality of life for all who live, work and play in our city.”

“As an industry leader, CoStar Group employs nearly 5,000 people in 14 countries with our headquarters in Washington, D.C., yet our operations here in Richmond are by far our largest,” said Lisa Ruggles, Senior Vice President of Global Analytics, Research and News, CoStar Group. “With the strong support of the Commonwealth and City, coupled with the incredible, diverse talent pool, the active local business community, and vibrant culture of innovation unique to the city, we are proud to say we’re committed to Richmond.”

Downtown Richmond’s neighborhoods include Shockoe to the east, Manchester to the south, Monroe Ward including parts of Virginia Commonwealth University to the west, Jackson Ward, BioTech and VCU Health in Court End to the north, and the Financial District, Riverfront, and James River in between.

“Downtown Richmond has been going through a dramatic transformation for decades, said Lucy Meade, Venture Richmond’s Director of Economic Development and Community Relations, who has long tracked downtown development for the Downtown organization.

“Billions upon billions of dollars of investments have taken place from historic preservation projects and adaptive reuse to new infill construction. Neighborhoods that were once industrial, like Shockoe and Manchester, are now vibrant residential and mixed-use neighborhoods. Old office buildings have been converted into chic lofts and hotels, a trend that many cities across the country would love to see happening in their downtowns.”

Downtown attracts a diverse population of residents, many of whom are young and well educated, with 57% having a bachelor’s degree or higher.* Downtown has 53% of all jobs in the City and 63% of its knowledge workers.* Creative workspaces fill high rise buildings, funky historic rehabs, and quirky storefronts.

But Downtown isn’t just a place to live and work, it is also a place to play and visit. Downtown’s historic neighborhoods include art galleries, public art, a plethora of award-winning restaurants and unique local shopping. Downtown Richmond’s riverfront is made up of great outdoor public spaces, the Canal Walk, the Virginia Capital Trail, outdoor festivals, and the mighty James River with class IV rapids and miles of park system trails attracting millions of visitors a year. In 2021, there was a 15% increase in visitors to the Canal Walk between June and October, compared to the same time period in 2019. And there were 500,000 pedestrians and cyclists who crossed the T. Tyler Potterfield Memorial Bridge as people made their way to and from Brown’s Island in 2021.

* Source: International Downtown Association Research on Richmond for “The Value of U.S. Downtowns and Center Cities”