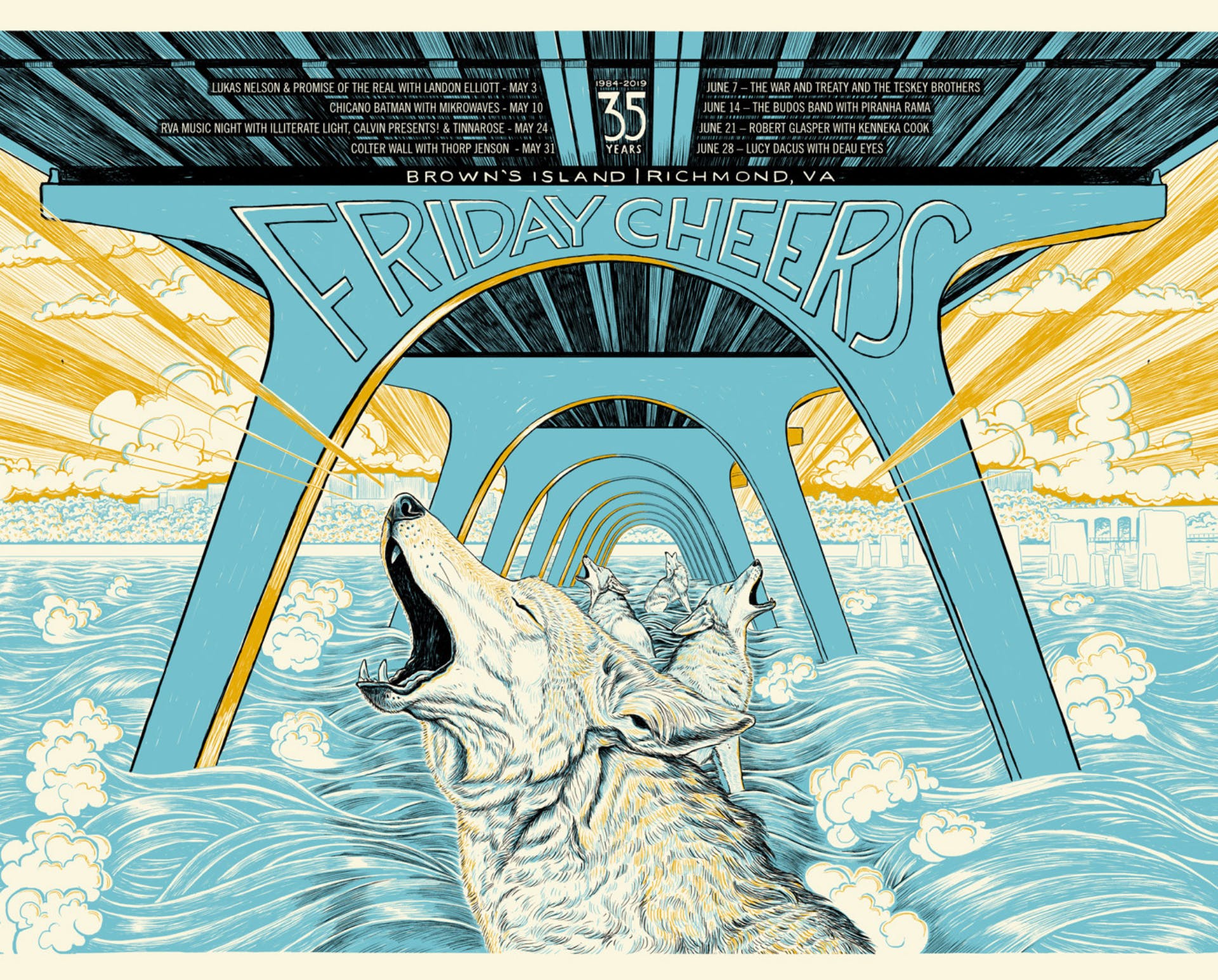 Learn more about the inspiration behind this year's design, who Katie is most excited to see and more! 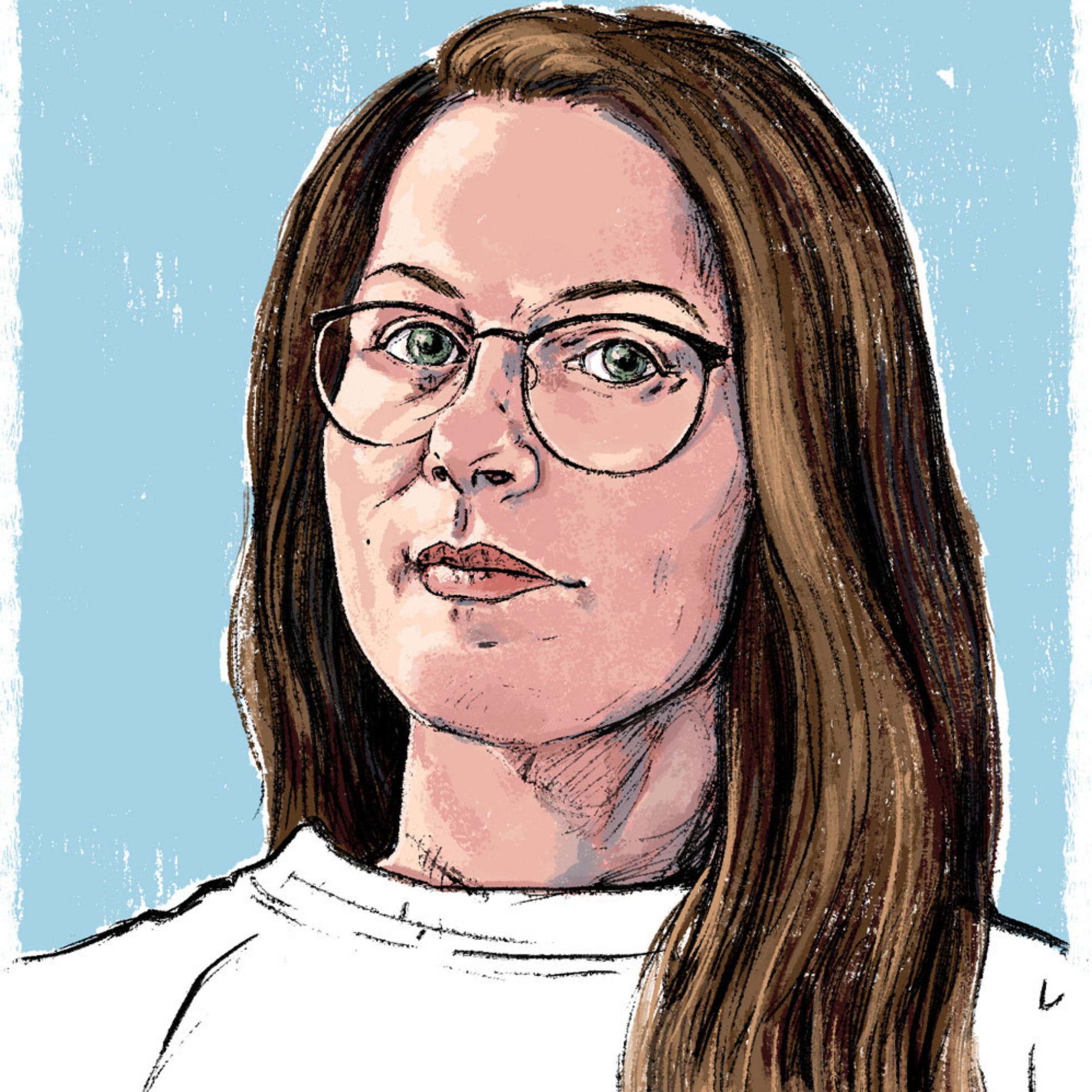 This isn’t your first time designing a poster for one of Venture Richmond’s events, you designed the very popular 2016 Richmond Folk Festival Poster. How was this process different to your experience three years ago?

The Folk Festival is such a Richmond institution at this point, and the community of people who put it on are so dedicated, that when you're invited to do something like the poster, you feel like you're becoming part of a club.

What that invitation wound up meaning for me was how to balance and respect the history and breadth of the event, respond to the feedback from the past artists who serve as almost an art-directorial-committee, develop something that everyone felt spoke to Richmond as we understand it and bring my personal style and voice to it. That's kind of a run-on-sentence, but I think it says something about how complex that project can be. Of course I loved working on it because the Folk Festival is a great client and the work is its own reward: to find the connection between so many different considerations, create a piece of art from all of that and to end up really liking the finished product.

For this project, the scope was a little narrower, but the process was very open. The relaxed vibe of Friday Cheers is much more like a regular rock show, and even though, clearly after 35 years, it's also an institution, it was something that I felt I could get a little weirder with. Sketch-wise, I worked in a more stream-of-consciousness way on the concepts and then chatted with Stephen (Director of Events) to make sure we were on the same page. Once we talked through this idea, I just moved forward with it. Sometimes, too free of a rein can actually be a harder way to work (constraints are often super helpful), but because of the mood we were trying to capture, I think we struck a really good balance here.

What was the inspiration behind your design for this poster?

DID YOU GUYS KNOW WE HAVE COYOTES? (Probably, yes, you did). But man, we have coyotes in the middle of the city. A lot of my work incorporates animals - sometimes anthropomorphized, sometimes not - and I really enjoy learning about animal behavior and evolution (armchair zoologist over here). When I found out that there were coyotes in the city, I was surprised, but I figured they would stick to Forest Hill park. After I saw one run down my alley near Texas Beach I became so enamored of them. One the one hand, oh my god we (the collective "we") have predatory canids living near our children and house pets, but on the other hand, this is fascinating, and how unbelievably adaptable are they to make this move to urban spaces? It feels surreal and kind of magical to see them in Byrd Park at dusk, but then again... I don't have a toddler or bite-sized pets.

The other inspiration is obviously the river, but specifically that view from Brown's Island looking south through the Manchester Bridge trestles. It's such an iconic Richmond view (I'm sure Instagram could tell you), and one I always associate with Brown's Island (though Stephen pointed out to me that this is is the band's view during Friday Cheers, not the crowd's, which I think is kind of cool).

We see the James River has, again, a large presence in your design. What connection and/or meaning does it hold for you when you think of Richmond Folk Festival and Friday Cheers?

When I think of summer in Richmond, I always think of the river. I'm sure part of this is because I live so close to it, but if I were to describe Richmond to someone who had never been here, and I was trying to sell its particular charm, I would talk about going down to the river with friends and drinking a beer, or spending a day tubing, or going rock-hopping at Belle Isle. It's an incredible cliché to say that the river brings people from all over the city together, but also... it does? The fact that Venture Richmond holds these music festivals right there on the river adds a really beautiful dimension to them, so it's really intrinsically connected to the experience of the festivals for me. 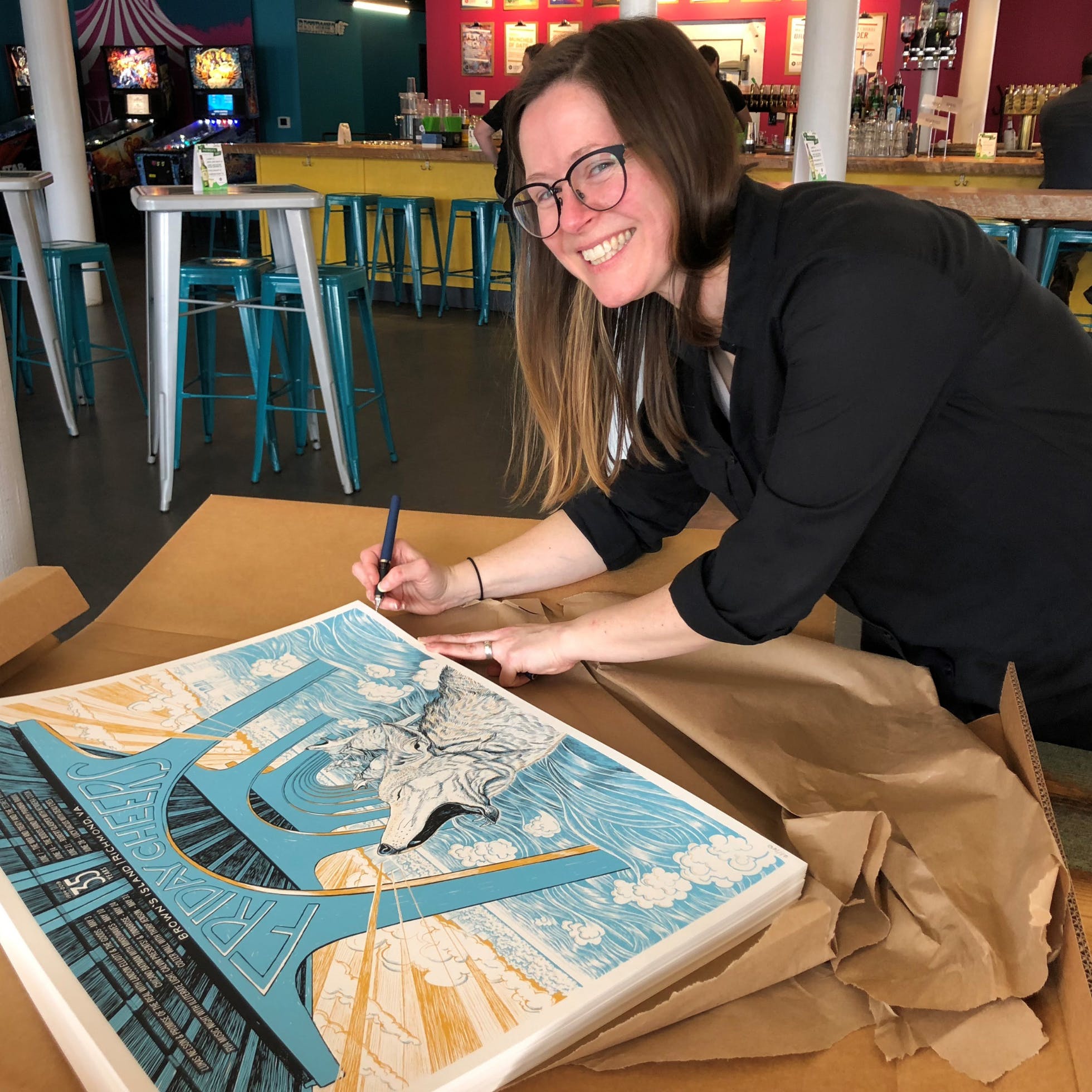 When you were dreaming up this idea, what were some of your first and/or favorite thoughts about Friday Cheers?

I have a really specific and vivid Friday Cheers memory of seeing Neko Case, who I love so so much. It was shortly after she had released "The Worse Things Get, the Harder I Fight, the Harder I Fight, the More I Love You," and they were playing this song "Ragtime," which is one of my favorites from that record. I was with my husband and some of my very best friends, and everyone was just in such good mood because the show was great, the weather was beautiful, all that. The sun was going down behind the train tracks, and just as the song builds to this really triumphant part, a freight train comes screaming through, basically over the stage, and everyone just erupted. The band was super into it, the crowd was super into it, and it was just one of those moments that reminds me why seeing live music is such a joy.

I wanted to capture a little bit of that moment of everyone singing together and the golden light coming through in the poster.

You’ve talked about using your appreciation of music and the large, local music scene as a way to put your art out there in the past, what ways would you like to see the two used together more throughout RVA?

Oh man...this is hard because I think there are so many people in town who are doing a great job in these arenas already. I'm on the board at Gallery 5, and we just did a show-posters show, which was super fun because we had stuff from the early 80's up to shows that had just happened that month. Rivanna Youngpool (the Operations Manager at the Gallery 5) booked some great (music) shows to open and close the art show.

In an ideal world of infinite human resources (and financial resources, tbh) it could be cool to do something like a music festival where artists and musicians work together to create custom pieces of art that are inspired by that band's music. Then the art would be produced as a limited edition poster, but also the original could be auctioned off - possibly for something like RPS or another organization that is integral to the city? Maybe there would be workshops for art and for music, like a majorly scaled down version of a Girls Rock Camp situation where you could learn a few guitar chords, or like the instrument petting zoos where people get to experiment with instruments. Local arts orgs could do printing demos using the show posters, and have some basic hands-on art activities as well. Essentially something where visual arts and music are tightly and intentionally integrated. This would be a nightmare to produce I am sure, but since I'm spitballing here ¯_(ツ)_/¯

While the coyotes seem to speak more to Friday Cheer’s setting, if you were to illustrate the event as one of your famous anthropomorphic animals, what animal would that be?

Haha, good question! I actually didn't really have any anthropomorphic animals in my sketches for this year ... but I could see a Cool Otter in sunglasses having a nice time at Friday Cheers (I put this otter in an Earth Day poster once). Maybe he'd be there with his buddy the Banjo Raccoon, since that guy just has to walk down from his porch in Oregon Hill to get to Brown's island.

Final question: Who are you most excited to see at Friday Cheers this year?

Kenneka Cook and Lucy Dacus. Kenneka, because I've seen her at G5 before and what she does is so cool, I'd love to see it/hear it in that big, outdoor space. Lucy, because I've never seen her live and this seems like a good time to rectify that.

Check out the printing process for this year's poster courtesy of Triple Stamp Press!

Want to buy a poster?

The limited edition Friday Cheers poster to commemorate 35 years will be sold on Brown's Island at the merchandise tent near the stage during this year's Friday Cheers. There is a limited quantity printed on 3-color print on French Whip Cream (100lb) paper that are all signed and numbered by the artist, Katie McBride. The price of the poster is $20. Cash or card.

Make sure to buy your Friday Cheers tickets today!

A special thanks to Katie McBride & Triple Stamp Press!